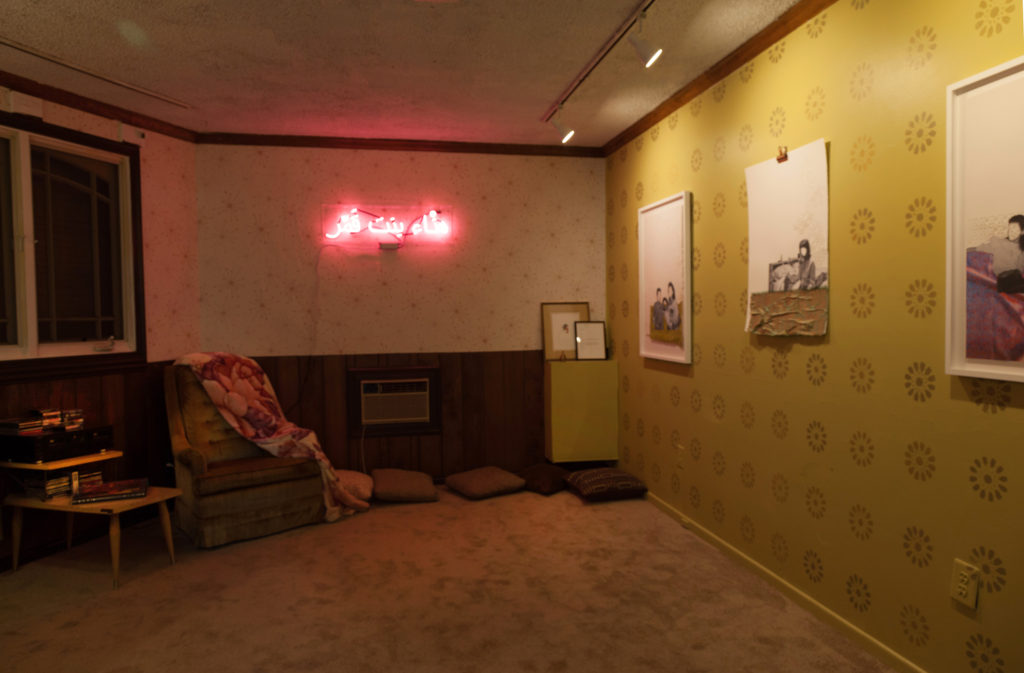 Women’s Center for Creative Work presents Exit Strategies, an installation by Yasmine Diaz made in residence during our “Control” quarter.

During a summer residency at the Women’s Center for Creative Work, Yasmine Diaz explores personal, family, and cultural histories as the source material for an installation and series of public programs. Exit Strategies navigates overlapping tensions around religion, gender, and third-culture identity, through the lens of a U.S. born Yemeni-American girl. Cultural differences and their points of friction are a significant focus of Diaz’s practice. Using her own life as a starting point, Diaz creates intimate mixed-media works to explore experiences as third culture kids, a term used to describe those raised in a culture other than their parents.

“We are known to be cultural hybrids and chameleons. While many of us have an increased awareness of the world around us, we are often faced with unique challenges such as confused loyalties with regards to personal values, traditions, and politics.”

For the installation, Diaz considers adolescence, a time when many young people begin to wrestle with the concepts of control and agency in the transition to adulthood. She recreates elements of the basement bedroom she had as a teen in Chicago — a place of refuge and privacy where she and sisters felt carefree, danced and played music, and gossiped about high school crushes. This space also represents a period when she struggled with the expectations of her religiously and socially conservative Yemeni-Muslim family, as well as the everyday melodramas of a typical teenager. As she was studying for SATs and writing college application essays, an arranged marriage loomed in the background, overshadowing her future plans. It became increasingly clear that speaking up about her disconnection with Islam and desire for independence was not an option. It was in the basement that she found herself strategizing for solutions — for ways to sneak out of the house and eventually, as part of a plan to leave her family, changing her name and identity for her own protection.

By sharing her own story, Diaz highlights the necessity for dialogue amongst women of marginalized communities who have been discouraged from speaking out against patriarchal oppression. They are accused of inciting racist backlash if they seek to challenge the misogyny in their own communities, which often results in their stories being silenced. With this work, Diaz creates a space for reflection, sharing, and discussion around issues that have become increasingly taboo to discuss in the age of xenophobia.

With a focus on gender, third-culture identity, and family, Yasmine Diaz works with mixed media on paper, drawing, and collage to question and assert her unique experiences as a Yemeni-American artist and feminist. Born in Chicago to parents who immigrated from the highlands of Yafa, the Los Angeles-based artist uses compelling found imagery to juxtapose the opposing cultures she was raised within.

Yasmine Diaz is a co-organizer and past fellow of at land’s edge. Her work has been featured by Deeyah Khan’s Sister-Hood, Kolaj Magazine, the Albuquerque Museum of Art, and in the collections of the UCLA School of Public Affairs.

Join WCCW artist-in-resident Yasmine Diaz for a night of collage, chill music, and collective skin-shedding via paper cutting + re-assembling. In the spirit of the summer theme, Control, we’ll make pieces that take control of our narratives; this could be inspired by something that has been building in you for years or something more recent.

And if you really want to let go, you can leave one of your finished pieces with Yasmine. She’ll use these to create one large-scale work and will make a set of prints using the WCCW’s risograph machine. Each participant will receive a print in the mail following the event.

Collage materials will be provided. Optional to bring any of the following: an image of yourself to use in your collage, any specific supplies you’d like to work, snacks to share.

Third Culture Kid is a term used to describe those raised in a culture other than their parents’. We are known to be cultural hybrids and chameleons. While many of us have an increased awareness of the world around us, we are often faced with unique challenges such as confused loyalties with regards to values, traditions, and politics.

In this discussion, we will explore and share how those of us who have grown up in multiple cultures have navigated our way through emerging adulthood, how our intersecting experiences and perspectives has influenced our work and understanding of the world we live in. In a study on the development of TCK women, several common themes emerged, including: the disruption of transition between cultures and places, feeling often the outsider, gendered expectations, and the value in establishing independence. We will touch on these and other topics in a conversation with artists Rema Ghuloum, Arshia Haq, Ahree Lee, and Yasmine Diaz.

As part of her residency exhibition Exit Strategy, WCCW Artist in residence Yasmine Diaz will give a brief presentation of her work followed by a conversation with local artist Samira Yamin.

Samira Yamin’s work explores the narrativization and representation of war through an interrogation of documentary war photography. Using repetitive, precisely articulated gestures, Yamin dissects, reorganizes, and often obliterates documentary images, resulting in a collision of representation and abstraction and the confusion of objectivity and subjectivity. Yamin received an MFA from UC Irvine and BAs in Art and Sociology from UCLA. She has had a solo exhibition at the Santa Monica Museum of Art, and has been included in numerous group exhibitions including at the Craft and Folk Art Museum and the Camera Club of New York, Metropolitan State University in Denver, and San Francisco State University. She lives and works in Los Angeles, CA.

This month, Control quarter artist-in-residence will host a discussion of A Map of Home by Randa Jarrar.

“Nidali narrates the story of her childhood in Kuwait, her teenage years in Egypt, and her family’s last flight to Texas, offering a humorous, sharp but loving portrait of an eccentric middle-class family.” — Goodreads

* The July 9 meeting has been cancelled.

Feminist Reading Group is a long standing WCCW community program founded by Dawn Finley and Eileen Ybarra. The group has explored many themes — feminist histories, race, class, gender, space, sexuality, art-making, culture, creative practices, relationship, conflict, globalism, family, colonialism, media, aging, work, organizing, reading, politics, writing, activism, and technology, among others — through reading fiction and nonfiction, and through an open process of sharing. If you would like to host a session of Feminist Reading Group, let us know what book you’d like to read! Email nicole@wccw.us.

View other WCCW Artists in Residents and learn about the program here.